The Messy Meaning of Mindfulness

The Messy Meaning of Mindfulness

Mindfulness. The word is getting attention.  The meaning of the word is getting attention.  Take Mindful Magazine’s recent response to New York Times’ “The Muddied Meaning of Mindfulness.” I read both articles.  I will admit that my first learning of the two articles came as an email from Mindful Magazine landing in my inbox; I’m a subscriber.  However, as a stress expert, mindfulness trainer, practical mindfulness research-practitioner and Founder at Mindful Effect, the great debate regarding the word ‘mindfulness’ and its meaning is in the forefront of everything I do at Mindful Effect as the meaning – both formally and socially constructed means are more than the 10,000+ lakes in Minnesota.  Maybe that’s a bit embellished but one cannot argue that too many definitions of one word exists.  And that in itself causes a lot of confusion, misconception, tension, and stress. 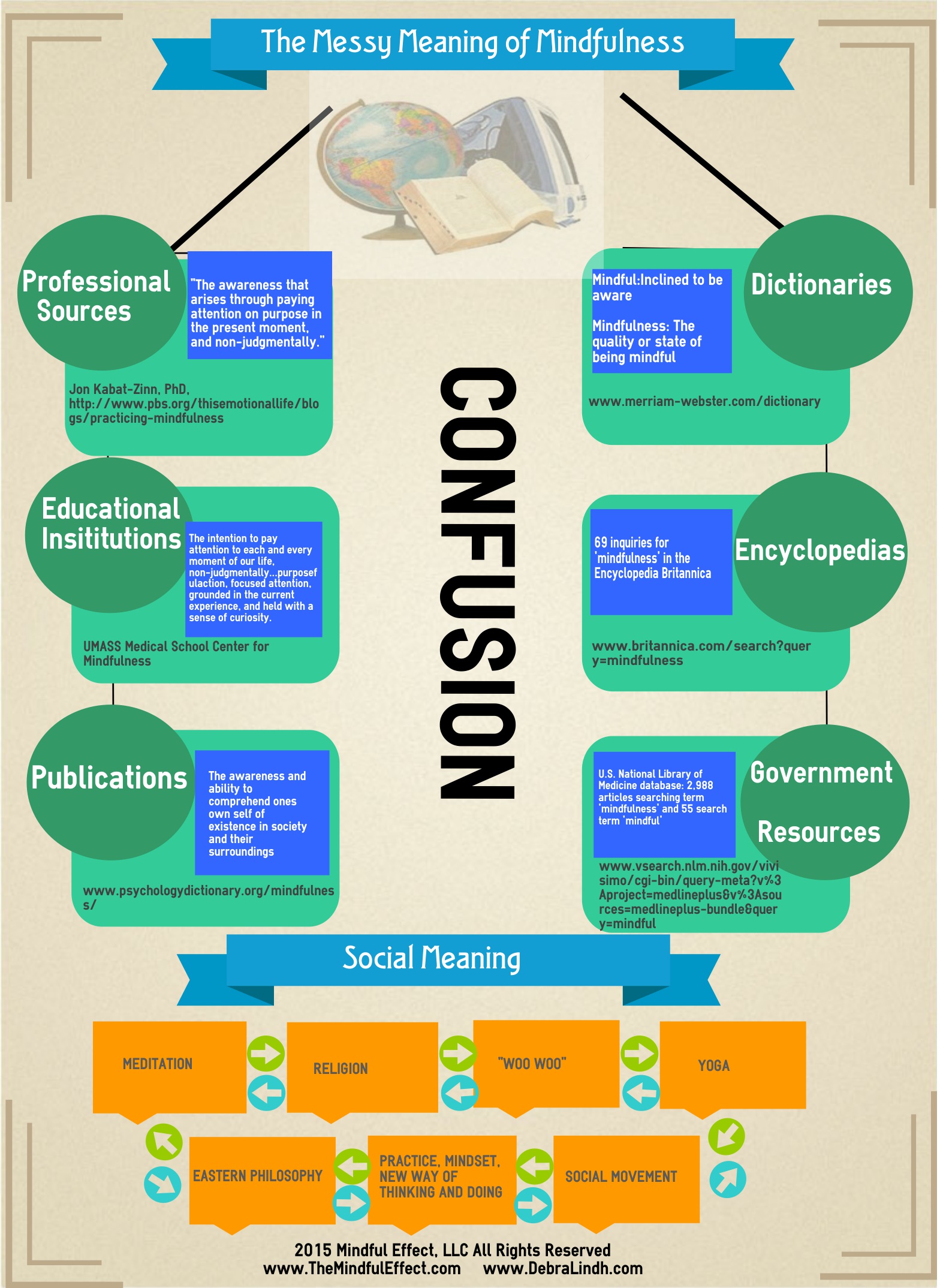 Reading both articles, I found myself not siding with one powerful position over the other.  Instead, I found myself siding with both; agreeing on points from Ms. Virginia Heffernan’s as mindfulness has become an “American Brand” and whose cynicism is appreciated as she calls our attention to the shadowed elephant of mindfulness. In as much, Mindful Magazine’s Publisher, James Gimian, and Editor-in-Chief, Barry Boyce, point out the many benefits and social contributions of mindfulness yet, they do not answer their own question: “Does it mean its meaning is muddied?”

I believe the meaning of mindfulness is more than muddied.  I believe it’s gotten messy. Regardless of what I believe, the proof is in the pudding.  Just Google the words “mindful” and “mindfulness” and see the number of hits related to definitions.  Better yet, for folks with access to peer-review journal articles (yes, I know…my doc side had to include this in here) such as any within the American Psychological Association, conduct a search within any academic database and again, many articles appear with authors positioning a crafted definition.

However, is this really the best use of our time – to engage in an infinite loop of definition positioning? Or should our awareness and attention be directed to the field and practice of mindfulness?

Mindfulness as a field, practice, and industry is unregulated.  Anyone can pick up a book and read works from Drs. Kabat-Zinn or Langer, conduct a Google Search, and the next day put out a shingle and claim they are a mindfulness coach, trainer, expert, consultant…you get the idea.

Where I tend to error on the side of caution is linking everything back to the moral obligation and ethics of “do no harm.” Yes.  As with any field of study and practice, moral and ethical practices exist.  However, mindfulness is a young mainstream modern concept. I am not saying that it hasn’t existed for many years.  I am saying that the term and practice is more in the forefront today than in previous years. Which begs me to ask fellow practitioners, researchers, teachers, and the media these questions:

While I can see both sides of Mindful Magazine and New York Times’ articles, I would like to point out, while the great debate continues, perhaps our awareness needs to focus less on the disparities of what mindfulness is and is not and focus more on how we can create a structure to an industry and practice, develop what the structure would look like along with its components, implement standards of practice housed similarly to the American Medical Association, integrate these standards into education and academic institutional programs such as with UMASS, all the while providing a lot of help to people around the globe.

I believe it’s time to become mindful of where our awareness and attention is targeted, identify and understand our triggers which create an auto-pilot of continued confusion and debate, identify the overall purpose of mindfulness, and continue to let our awareness guide us with an ethical practice of service to others.  I mean…what could be wrong with that?